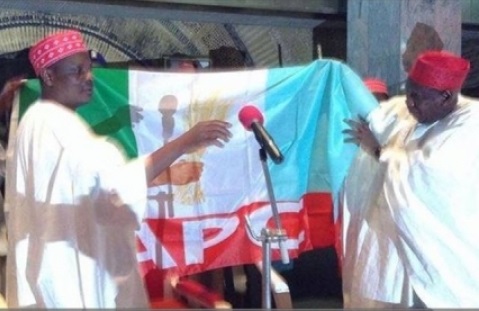 In what could be described as a rare occurrence in Nigeria’s political history, Governor Rabiu Kwankwaso of Kano has endorsed his deputy, Alhaji Abdullahi Ganduje, as his successor.

The decision was taken early Friday at the Africa House of the Government House, Kano, after a marathon meeting involving senior members of the All Progressive Congress, APC.

The members present agreed that Mr. Ganduje will succeed his boss as governor, while Kabiru Gaya, who is also eyeing the APC governorship ticket, was endorsed to re-contest his seat as the Senator representing Kano North Senatorial District.

The decision led to celebration in the camp of Mr. Ganduje.

Similarly, a former deputy governor of the state, Abdullahi Gwarzo, was given the green light to fly the APC senatorial flag from Kano North.

Brig-Gen. Lawal Jafaru Isa (retd), who is a former governorship candidate of the defunct Congress for Progressive Change, CPC, and loyalist of former Head of State, Gen. Muhammadu Buhari (retd), was cleared to contest the Kano Central Senatorial District seat, while Abdulrahman Kawu Sumaila, who is the Minority Leader, House of Representatives and a governorship aspirant, was not given the go-ahead to pursue his gubernatorial ambition or re-contest his seat in the House.