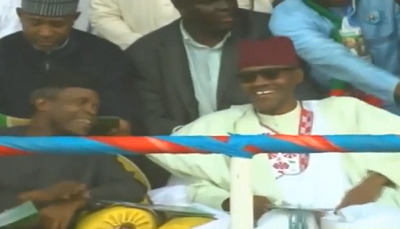 The All Progressives Congress, APC, presidential candidate, Muhammadu Buhari, on Tuesday in Kano, called on his supporters to endeavour to get their permanent voter cards as the love and support shown towards him would be wasted without their votes.
http://www.newbalanceshoesinc.com new balance golf shoes
Mr. Buhari spoke at the Sani Abacha Indoor Stadium, venue of the party’s presidential rally.

“You should know that whatever love and support you will show to me, without you having your permanent voters card as the only means of casting your votes, then the love and support would be wasted and of no use”, he said.

Buhari reminded his followers that there were three things he was campaigning against: unemployment, security and corruption.

“Nigerians should open their minds and reject ethnic and religious jingoists, who are hell-bent on using every detrimental method to achieve their myopic tendencies”, he said.

He noted that Nigeria was in dire need of somebody who would salvage it from its predicament of social disorder and heavy corrupt and bribery practices that have culminated into near breaking the nation.

The APC presidential flag bearer, who donned a red cap signifying his alliance with the state governor’s Kwankwasiyya movement, told the mammoth crowd to ensure that they voted for APC at all levels.

He also enjoined his supporters to cast their vote and stay behind to ensure that the votes were counted and displayed.

“You should cast your votes, wait and ensure that your votes counted, and all these would not be possible without you having your PVC, which will allow you to exercise your civic rights”, Mr. Buhari said.

Prior to the rally, Buhari had paid a visit to the palace of the Sarkin Kano, Muhammad Sanusi II.

He was accompanied by the state Governor, Rabiu Kwankwaso; Sokoto State Governor, Aliyu Wamako; the Speaker of the House of Representatives, Aminu Tambuwal; APC national leader, Bola Tinubu and the party’s national chairman, John Oyegun, and a host of other dignitaries.

However, due to the rush of the crowd that had thronged to catch a glimpse of him, the former head of state was unable to disembark from the party bus but waved to Sanusi II through the window.

Tinubu, however, managed to talk briefly to the monarch before the entourage moved to the Sani Abacha Indoor Stadium for the campaign rally.

Mr. Buhari, while in Kano, commissioned the Kwankwasiyya Kofar Nassarawa fly-over bridge, constructed at over N6 billion and said to be the longest in West Africa as well as the Senate Building of the North-West University, Kano, established by Gov. Kwankwaso.