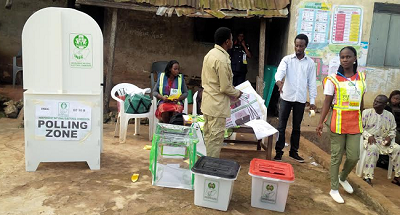 “Emotions are heightened; the anxiety is overwhelming as Nigerians await the final pronouncement of the 2015 Presidential elections results held over the weekend. So far, with the knowledge of results available in public domain as garnered by independent but verifiable sources and also results collated by INEC from various states across the federation, it is perceptibly clear that the opposition Party of All Progressives Congress is enjoying a comfortable lead against the incumbent People’s Democratic Party.

I am in no way trying to make a final pronouncement in favour or against any candidate given the fact that results are currently been released where elections were earlier delayed and results are concurrently been announced by INEC the electoral body mandated to do such officially. So far the election results are inconclusive but as a Nigerian who exercised his franchise like many of my compatriots and have since kept vigil with the collation of results so far, I am enthusiastic and highly expecting the final pronouncement of the results which I know will soon be made available to all.

As we patiently await all the results while some of us earlier watched the live streaming of available results from INEC National Collation Centre in Abuja, I would like to say our dear country is indeed witnessing a historical event unveiling right before us. The unfolding events of today will definitely shape the history and political landscape of our nation.

Without a shred of doubt by now, many politicians and their ardent followers should know their fate before the official pronouncement of results is made. It is my candid opinion that whoever is pronounced the winner having satisfied all the necessary conditions as stated by the electoral law, sees to it that the electoral contest was not about “a winner takes it all” but that indeed it is a triumph for democracy and the good people of Nigeria should be commended for exhibiting democratic maturity in ensuring their votes counted and the will of the majority is respected and upheld against all evil forces that along the way posed threats to undermining and derailing the process.

The elections to me have never been “a do or die” affair therefore, I have constantly expressed my views without nursing acrimony against my fellow compatriots who hold diverging views from mine. I have always believed in the egalitarian school of thought that guarantees the freedom of expression and association. I would also like to reiterate that though in the course of canvassing support for our various candidates, we must have regrettably engaged in some sort of uncouth arguments/heated debates, for me it is sometimes healthy for such to occur provided our differences are resolved amicably so as to better foster friendship, better enlighten and understand ourselves peacefully on whatsoever platform than it generating into fists fights like it was once experienced in our hallowed chambers. Lol

I am most certainly proud of our teeming youths who have shown more interest than ever before in actively participating in the democratic process. Someday we shall relay our experiences and stories about how patriotic we are for our various roles played in ensuring the smooth transition of power to another democratically elected President whom very soon will be made known to the electorates by the chief electoral Umpire.

As we all await the final pronouncement by the Chairman of INEC Prof. Attahiru Jega, I would like to borrow a famous quote made at the end of Nigerian Civil war which began on the 6th July, 1967 and ended on the 15th January, 1970 in that significant speech marking the end of the unfortunate war, Gen. Yakubu Gowon the then military head of state declared that there was “no victor, no vanquished” in the same spirit of brotherliness and national harmony, I would also like us to embrace the slogan by shunning all acts that will incite violence as we forge ahead as one indivisible nation no matter the outcome of the elections.

We should always remember that Nigeria is ours irrespective of our religious differences, ethnic and political proclivity. The task to build and prosper our nation lies in our hands. Let us all be patriotic enough to place the interest of our dear nation above all selfish interests.