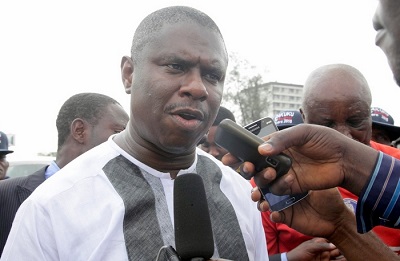 Governorship candidate of the All Progressives Congress in Rivers State, Dr. Dakuku Peterside, has alleged that the Independent National Electoral Commission’s Resident Electoral Commissioner, Mrs. Gesila Khan, and the Peoples Democratic Party in the state were frustrating his move to seek justice at the election petitions tribunal.

Peterside accused the REC of deliberately withholding materials for the April 11, 2015 governorship polls to be tendered before the election petition tribunal, adding that the situation was making it difficult for him to approach the tribunal.

Speaking during a press conference in Port Harcourt on Tuesday, Mr. Peterside explained that Mrs. Khan had made it impossible for the APC to access any of the election materials that should be made available to the election tribunal.

“The delay in releasing the material was a deliberate ploy by the commission in the state and the PDP to frustrate the party in getting justice. All these attempts by PDP and REC were meant to frustrate APC from filing their petition at the election tribunal”, Peterside said.

Also, the State Chairman of the APC, Dr. Davies Ikanya, recalled that the leadership of the party had approached the state REC, through a letter, on April 13 and 14, requesting for the release of the document used for the governorship poll.

Ikanya maintained that while the party applied for 17 documents, only few were made available.

He pointed out that the reluctance of the state REC to release all the documents applied for by the APC was an indication that no election was held in the state on April 11, 2015.

“The APC lawyer was beaten by some thugs. He (APC lawyer) was later allowed in and the REC later agreed that the documents would be made available yesterday (Monday). But when we got there on Monday, one of the INEC officials made a telephone call.

“Soon, thereafter, three trucks loaded with thugs came into the INEC premises, threatening fire and brimstone, should the documents be made available to us.”

“What Mrs. Gesila Khan is doing is to force us to go to court to seek for a legal order compelling her to release the document, knowing that if we should take such a step, it would have been too late for us to go to the tribunal”.

But the State Public Relations Officer of INEC, Anthonia Nwobu, while reacting to the claim, said that all applications for certified true copies of documents by political parties were being processed.

“All applications for certified true copies of documents by political parties and individuals are being processed and are issued as at when due according to law”, Nwobu said.

She stressed that INEC in the state had done its work within the ambit of the law, adding that politicians should know that the elections were over while aggrieved persons were expected to take their matter to court.