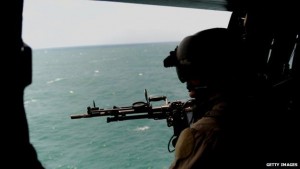 EU ministers have approved plans to establish a naval force to combat people-smugglers operating from Libya. The aim is to launch the operation next month, with a headquarters in Rome under an Italian admiral, EU foreign policy chief Federica Mogherini said. BBC reports:

The EU is struggling to cope with a surge in illegal migrants from Africa and the Middle East crossing the Mediterranean Sea to reach Europe. Ms Mogherini was speaking after talks with EU foreign and defence ministers. The UK is playing the lead role at the UN Security Council in drafting a resolution that would give the EU a legal basis for using military force against people traffickers.

Ms Mogherini stressed that co-operation with officials in Libya, a country torn apart by feuding militias, would be vital to make the operation succeed. “We are looking for a partnership – there is a responsibility the Libyans themselves have to take on their territory, for the land and sea borders.”

The EU would have to work closely not only with the recognised government in Tobruk – represented at the UN – but also with rival officials in Tripoli and Misrata, to dismantle the smuggling networks, she told a news conference in Brussels. “The [Libyan] municipalities might have an important role to play,” she said.