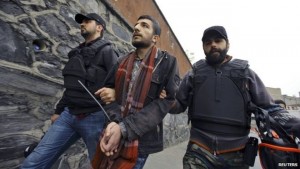 Some of the demonstrators threw bottles and stones and set off fireworks during clashes near Taksim Square. Thousands of police blocked streets leading to the square, a traditional rallying point for leftist protesters.