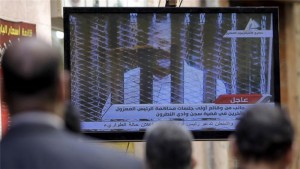 A court in Cairo has adjourned the final ruling on a death sentence recommendation against former president Mohamed Morsi. The judge in the case postponed the verdict until June 16. Aljazeera was there:

Morsi entered the courtroom for the hearing on his death sentence on Tuesday as fellow defendants chanted with “down, down with the military”. An Egypt court sentenced Morsi to death on May 17 for a mass prison break in 2011, prompting immediate condemnations from rights groups and world leaders.

The court ruled that the sentencing of Morsi and 105 others will be referred to the grand mufti, the highest religious authority in Egypt, for confirmation.

Egyptian authorities have banned Morsi’s Muslim Brotherhood since his overthrow and arrested thousands of his supporters. In April, an court sentenced Morsi and 12 other defendants to 20 years in prison for ordering the arrest and torture of protesters in clashes outside the presidential palace in December 2012