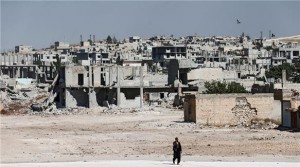 Islamic State of Iraq and the Levant (ISIL) fighters have launched attacks on two fronts in northern Syria, re-entering the Kurdish town of Kobane and seizing parts of the city of Hasakah. Aljazeera was there:

Dozens of ISIL fighters attacked Kobane on the border with Turkey, where at least 12 people were killed in a car bomb attack at the start of the offensive on Thursday morning. ISIL fighters were wearing Kurdish and Free Syrian Army uniforms, the sources told Al Jazeera, as they attacked from three sides and took several positions inside the battleground town.

“There’s a lot of fighting going on there, that we understand is ongoing,” our correspondent said. “Dozens of people have been trying to flee.” The Kurdish group YPG asked civilians to stay home as it sent reinforcements to the town.