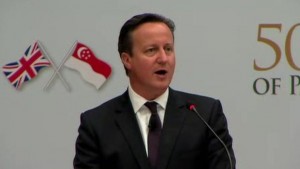 Foreigners must not be able to buy UK homes with “plundered or laundered cash” as part of a global effort to defeat corruption, David Cameron has said. Speaking in Singapore, the prime minister vowed to expose the use of “anonymous shell companies” to buy luxury UK properties – often in London. BBC reports:

The PM said his message was “London is not a place to stash your dodgy cash”. Corruption, he added, was “a cancer which is at the heart of so many of the world’s problems” and must be tackled.

Mr Cameron is on a four-day tour of South East Asia. On Monday, he announced the UK and Indonesia had agreed measures to counter the “shared enemy” of Islamic State (IS) extremism. Later in the trip he will travel to Malaysia and Vietnam.

He has been accompanied by 31 British business leaders in an attempt to drum up trade with the UK and has also discussed the fight against terrorism with his counterparts. Describing corruption as “the enemy of progress”, he called for a “global effort” to tackle it, saying the world has “looked the other way for too long”.