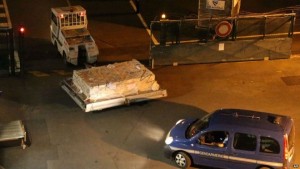 A piece of debris that experts believe could be from the missing flight MH370 has arrived in Paris from the French island where it was found on Wednesday. The object, believed to be part of a wing, was flown to the French capital from Reunion in the Indian Ocean. BBC has more:

From there it will be transported to a defence ministry laboratory in Toulouse for analysis. The Malaysia Airlines Boeing 777 travelling from Kuala Lumpur to Beijing vanished in March 2014. There were 239 passengers and crew on board.

Since then, an Australian-led search effort has been focused on a vast area of the southern Indian Ocean about 4,000km (2,500 miles) to the east of Reunion, a French overseas department to the east of Madagascar.

Experts have said the two-metre (6ft) object washed up on a beach could be a moveable piece of a Boeing 777’s wing, called a flaperon.