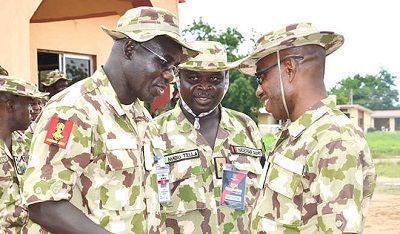 Gen. Tukur Buratai, Chief of Army Staff, says military is far better off under democratic dispensation than under the military regime.

Buratai made the assertion on Saturday in Bauchi while addressing senior military officers drawn from the Armoured Corps and 33 Artillery Brigade, Bauchi.

“The military is far better off under democratic dispensation than what it used to be under the military rules.

“We have, therefore, remains non-political as imbibed by the army, since 1999, and we must remain focused, loyal, professional and dedicated to our responsibilities.

“We must equally work with other sister agencies such as the police, state security service and other para-military organisations and must observe their rules”, he said.

Buratai also urged them to cultivate the spirit of ‘esprit-de-corps’ among themselves and to create peaceful co-existence between ranks and files, which was vital during operations.

He said that the military authorities have commenced the renovation of barracks and would construct more to curb shortage of accommodation being faced by the military.

Buratai expressed concern over shortage accommodation at the School of Armoured where officers on training had paired up, describing it as “not convenience to the regimentation”.

He said that the authorities was also studying the poor infrastructure, high school fees, training kits that had bedeviled military schools, staff primary and secondary schools and would soon proffers solutions.

The army chief commended President Muhammadu Buhari for providing the needs of the military, which was yielding positive results in the war against insurgency.

He assured that the military was on course and would soon complete its assignment against insurgency, following successes recorded on Friday and Saturday by the army. (NAN)