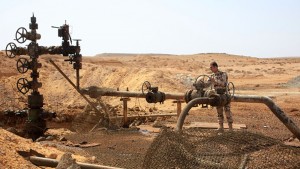 Efforts are under way to stop the flow of oil produced in areas controlled by the Islamic State of Iraq and the Levant (ISIL) group, to cut off its main source of revenue. Turkish authorities are cracking down on smuggling on its border with Syria, and in Iraq’s Kurdish region routes used by ISIL are being cut off.

US estimates have put ISIL’s sales of oil produced in Iraq and Syria at about $40m a month. However, it is believed there has been a 30 percent reduction in December in production from oil fields controlled by ISIL, mainly due to air strikes by the US-led coalition on oil-producing facilities and also from air strikes by Russians on tankers used to move the oil.

The fall in oil prices globally has also made it less profitable to smuggle oil. ISIL controls large parts of Iraq and Syria, including oil fields in both countries. An offshoot of al-Qaeda, it declared a caliphate in territory under its control since June last year.

Since then, it has fought the Syrian and Iraqi governments, other armed groups and Kurdish forces. Al Jazeera’s Bernard Smith, reporting from Istanbul, said Turkey has stepped up surveillance of its 900km-border with Syria. “In some places there are small pipes buried between Turkey and Syria to pump oil,” he said.