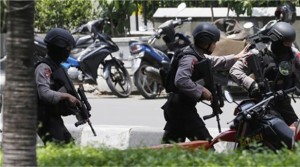 Indonesian police have arrested three men over links to attacks in Jakarta that left seven people dead including five attackers, local TV reported.  The arrests on Friday came less than 24 hours after the shooting and bombing rampage, the first of such attack in the country since 2009. Colonel Dwiyono told MetroTV that the trio were arrested at their homes in Depok district on the outskirts of Jakarta at dawn.

At least 20 people were wounded when at least five attackers opened fire near a Starbucks coffee house in the city. Those killed included an Indonesian and a Canadian. Officials said the attackers were armed with light weapons and suicide belts. Six blasts occurred about 50 metres apart in the central business district, which also houses a United Nations office.

The attacks were claimed by the Islamic State of Iraq and the Levant (ISIL) group in a statement on Thursday, in which the group claimed it had killed 15 people. Jakarta police chief Major General Tito Karnavian said the attackers were part of a group led by Bahrum Naim, an Indonesian ISIL supporter who is now in Syria, the Associated Press news agency reported. Al Jazeera’s Sohail Rahman, reporting from Jakarta, said many circumstances surrounding the attacks on Thursday remained unclear.