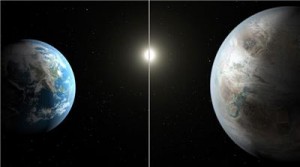 Scientists in the United States and Europe are working on ways to save us from asteroids that may lie on collision course with planet Earth. Experts from NASA and the European Space Agency are looking at ways to change the paths of two asteroids – Didymos and Didymoon.

“An asteroid is very large – almost the size of a mountain – and if we hit it with a spacecraft, we only make a tiny change in the velocity. But over time that’s the difference between hitting Earth and not hitting Earth,” said Andy Cheng, lead investigator for the Asteroid Impact and Deflection Assessment (AIDA) study at NASA.

The cosmic masses are not heading our way for another couple of centuries, but the scientists say it is a “very important” mission. “We want to have the capability to do this as soon as possible because we know these things are out there. But to find all the things that are potential threats is a very big goal,” Denton Ebel of the American Museum of Natural History said.

“This particular mission is to take the next step, which is something very important. What are you going to do about it if something actually has your name on it.” The project is still in its theoretical phase, awaiting approval for launch.