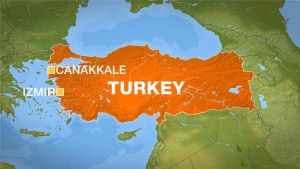 At least 33 refugees, including at least five children, have died after their boat sank in the Aegean Sea while trying to cross from Turkey to a Greek island, according to Turkish media. The refugees had set off from the district of Ayvacik in Canakkale province in an apparent bid to reach the Greek island of Lesbos.

State-run Anadolu Agency said that 75 refugees were saved and hospitalised by the Turkish coastguard on Saturday morning.  The International Organization for Migration (IOM) has recorded the deaths of at least 244 refugees and migrants who tried to reach Europe this month via the Mediterranean Sea. The data is almost 200 percent higher than the 82 people who died last January, and overwhelmingly more than the 12 people who died in January 2014.

About 850,000 migrants and refugees crossed into Greece last year, paying smuggling gangs to ferry them over from Turkey in often frail boats. In a deal struck at the end of November, Turkey promised to help stem the flow of refugees to Europe in return for cash, visas and renewed talks on joining the EU. Turkey is host to 2.2 million Syrians and has spent around $8.5bn on feeding and housing them since the start of the civil war nearly five years ago.