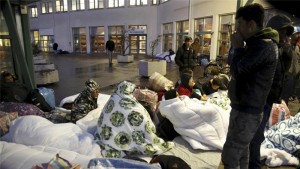 Rights groups have criticised the Swedish government’s plans to expel up to 80,000 asylum seekers whose applications are expected to be rejected, a move viewed as the latest in a string of similar measures. Speaking to the local Dagens Industry newspaper on Thursday, Swedish Interior Minister Anders Ygeman said that between 60,000 and 80,000 people will be deported.

An estimated 45 percent of Sweden’s more than 160,000 asylum applicants in 2015 are projected to be denied.  Ygeman said the deportations would be carried out over a span of several years, while the European Union Commission announced its support for Sweden’s announcement.   Alia al-Ghussain, a senior researcher and advocate at the Malmo-based Centre for Refugee Solidarity, said the number “is quite shocking because they have not processed all of the applications and cannot be sure they will deport that many people”.

Among other countries, many of the asylum seekers expected to be rejected are from Eritrea, Somalia, Sudan and Palestinian refugees from across the map of the Middle East, al-Ghussain told Al Jazeera. “The government’s categorisations of what areas are safe and which aren’t in many of these countries is not representative of reality at all.”