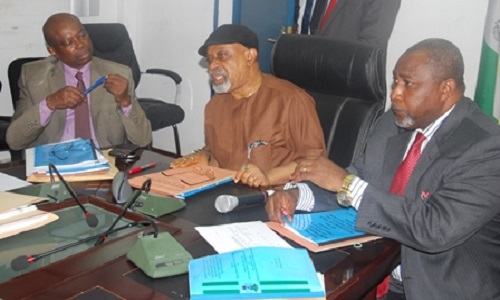 The Minister of Labour and Employment, Senator (Dr) Chris Ngige has warned that in spite of the global oil crisis, occasioned by a crash in the international price of crude oil, the Federal Government will not accept any job loss in the oil and gas sector.
This is just as he assured unions in the sector that the government would forestall any threat to industrial harmony.
Ngige gave the assurance at a meeting with members of the National Union of Petroleum and Natural Gas Workers (NUNPENG), Petroleum & National Gas Senior Staff Association of Nigeria (PENGASSAN) and contractors in oil and gas in his office yesterday.
According to the Minister, if new jobs could not be created in the sector or other sectors, efforts must be made to keep the present jobs.
He said: “We all know that the backbone of the Nigerian economy for now is still the oil and gas. As the Minister of Labour and Employment, I am committed to forestalling any issue that could bring industrial unrest in the sector or threaten job security in the country.
“I wish to put on record that the Buhari administration has zero-tolerance for any form of job loss. If the oil and gas sector or any other sector for that matter cannot create new jobs, they must go the extra-mile to retain the existing ones. Any job loss has multiple adverse effects on the population.
“I have before me petitions, which border on industrial and employment relations – retrenchment, casualisation, redundancy as well as unfair treatment of Nigerians in the employ of the oil majors.
“I have, therefore, summoned this meeting for us to properly ventilate the issues and make a way for a speedy resolution, after which we shall hold stakeholders’ summit”.
On the contentious issue of expatriate quota, Ngige said the ministry was already discussing with the Ministry of Interior to check the abuse of the nation’s immigration/labour laws and promised that the displacement of qualified Nigerians by foreigners would soon become a thing of the past.
In his remarks at the parley, Minister of State for Labour and Employment, James Ocholi (SAN), stressed the resolve of the ministry to sustain industrial peace and harmony, stressing that the economic realities on the ground have made any job cut very unpalatable in view of its negative consequences on Nigerians.
Earlier, NUPENG President, Comrade Igwe Achese, said the drop in the international price of oil was not a tenable reason for the continued enslavement of Nigerian workers through contract staffing and casualization.
The NUPENG boss pointed out that nowhere in the world are workers subjected to harsh and unfriendly labour environment as done by the oil majors in Nigeria.
The PENGASSAN National President, Comrade Francis Johnson, called for the urgent passage of the Petroleum Industry Bill (PIB) as a roadmap to the maintenance of peace and harmony in the oil and gas sector.