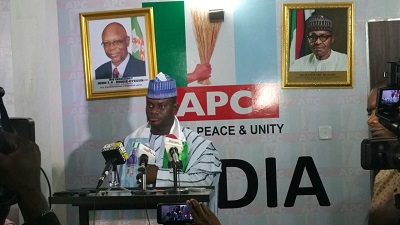 The Governor of Kogi State, Alhaji Yahaya Bello, yesterday took the crisis rocking the state chapter of the All Progressives Congress, APC, which is also threatening to derail his administration, to the National Secretariat of the party in Abuja.
Recall that the Kogi APC last month passed a no-confidence vote on the governor, accusing him of romancing the opposition Peoples Democratic Party, PDP, in the state; a claim Bello strongly denied.
The governor, who drove himself to the party secretariat at about 12:15pm in a Maroon Porsche SUV, in company of his aides, headed straight to the office of the national deputy chairman, North, Senator Lawal Shuaibu, where he held a closed door meeting for about an hour after which he made for the office of the national chairman, Chief John Odigie-Oyegun.
Governor Bello, who refused to speak to the press about the outcome of his visit to the party’s secretariat, only said, “no press” as he headed back to his car.
However, it was gathered that the visit was not unconnected with the party’s posture towards the governor over some of his actions which the leadership is allegedly unhappy about.