UEFA have failed to name a single Premier League player in their Champions League squad of the just ended 2015/16 season.

Despite outstanding performances from Manchester City’s Kevin De Bruyne and Sergio Aguero, none of the top Premier League side made the list.

Meanwhile Barcelona’s Luis Suarez, Lionel Messi, and Andres Iniesta as well as PSG’s Thiago Silva have made it in despite their teams only getting to the quarter-finals.

There are also six players from each of the finalists, Real and Atletico Madrid, and only two from Bayern Munich – who many had expected to win the competition. 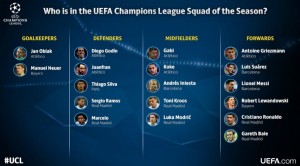 See the UEFA Champions League squad of the season below: