Some residents of Omi Adio/Apata/Gbekuba area of Ibadan have been hit by flood resulting from a down pour experienced between the hours of 7:30 till about 11pm Wednesday night. 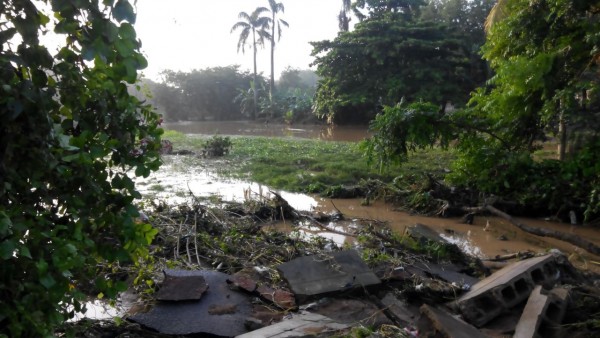 The flood, which submerged the access bridges along Odo Ona, NIHORT linking Gbekuba and neighbouring communities became unpassable after the rain flooded areas along the passage drain between Omi Adio to Odo Ona.

Motorists and people on their way home had no alternative but to remain where the water level was manageable so as not to be washed away.

Some residents along Peku Junction blamed the owners of the land where a large farm is located for the flooding in that area, as the landowners had refused the widening of the passage drain on their property when the ‎House representative of Ido Local Government Area, Hon. Adekunle Olalere, sent graders and bulldozers to widen the drain two weeks ago. Residents claimed that their refusal to allow the completion of the exercise to free passage of water into the Odo Ona caused the flooding.

Around Agbofieti, residents were seen hastily packing their belongings, and looking for safe haven.

There was a rumour that a family allegedly lost their breadwinner and a child, after they lost control of their vehicle around Aba Alfa area and were washed away by the moving water.

However, a woman in the said vehicle was said to have been rescued. Omololu Olumuyiwa, a source living in the Gbekuba area disclosed, in a telephone call that the flood trapped some families in their homes.

He claimed to have seen people calling for help as they could not again access to the link road out of the area.

According to olumuyiwa, “some residents have taken a bold step, using linking fences to the house where people were trapped for a rescue mission.

As of press time, three of the trapped persons in the house had been rescued while the volunteers were seen trying to rescue the remaining trapped persons.

Also, around Agbofieti, hoodlums have used the opportunity posed by the flooding to wreck havoc on residents in the area. Posing as rescue volunteers, the hoodlums were said to have robbed homes in the process.