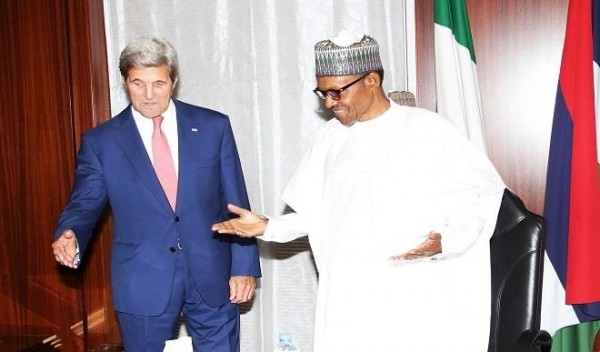 The United States has pledged to do more to encourage Nigeria’s fight against corruption even as it hailed President Muhammadu Buhari’s courage in tackling the hydra-headed monster.

“We applaud what you are doing. Corruption creates a ready-made playing field for recruiting extremists”, visiting U.S. Secretary of State, Senator John Kerry, told Buhari at a closed-door meeting at the Presidential Villa, Abuja, yesterday.

“You inherited a big problem, and we will support you in any way we can. We will work with you very closely. We don’t want to interfere, but will offer opportunities as you require”, the top U.S Government official said.

Mr. Kerry pledged his country’s assistance to Nigeria in tackling the humanitarian challenges in the North-East, saying the U.S would get the United Kingdom, France and others “to augment the support”.

“Nigeria is priority for us. We won’t miss the opportunity to work together, because you are making significant progress”, he said.

In his remarks, President Buhari assured Nigerians that the ongoing anti-corruption campaign in the country will be institutionalized and made to last beyond the life of his administration.

He was quoted as making the pledge at the State House while receiving Kerry.

A statement by his Special Adviser on Media and Publicity, Femi Adesina, quoted him as saying, “We will insist on the standards we’re establishing. We are laying down administrative and financial instructions in the public service that must be obeyed. Any breach will no longer be acceptable.

“We will retrain our staff, so that they understand the new orientation. And those who run foul of these rules will be prosecuted, no matter who is involved. But we will be fair, just and act according to the rule of law.

“Anyone perceived corrupt is innocent till we can prove it. We will work very hard to establish documentation for successful prosecution, and those in positions of trust will sit up”.

Buhari again appreciated the role the U.S played in the 2015 general elections in Nigeria, affirming that “America did not do it because of what it stands to benefit from us. You did it for the Nigerian people. It tells so much what the U.S stands for in the world”.

On the Boko Haram insurgency, he thanked the U.S for both their hard and soft military help.

“The training and intelligence that we could not muster ourselves, we received. The training has made Boko Haram less of a threat to Nigeria and the Lake Chad Basin region, while the military hardware has given our troops added confidence”, he said.

President Buhari also informed Mr. Kerry that though the militancy in the Niger Delta had impacted negatively on the economy and affected the positive intentions of international and local investors, his administration was showing restraint.

Speaking on the economy, Buhari said his administration’s focus was on diversification having learnt lessons from years of over-dependence on oil.