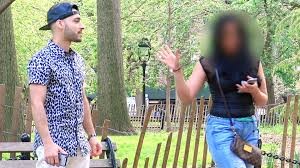 Use these powers for good, not evil. Guys do not like predictability — at all. In fact, most of the time, they like to have someone who keeps them guessing, makes them work for things, and generally isn’t a “sure thing.”

ladies, lets play some mind games. Here are some weird ways you canmake sure he’ll always remember your name… in a good or at least intriguing way.

1. Don’t reveal anything about yourself after brief flings, and usher him out as soon as you can.

Most guys assume that you are going to be looking to talk to him and be interested in his life. Some even assume that girls want a relationship with them, right off the bat. Instead of doing the normal thing, just shoo them out the door with little chit chat the first time or two you sleep with him. Then, slowly open up. More often than not, they will start trying to win you over, because they don’t know what to make of you.

2. Pull back when he starts to pull forward, but just by a little bit.

Some guys really melt at the thrill of the chase, and for those guys, pulling back can drive them insane. They’ll start to wonder what’s going on, what they can do to keep you around, and basically chase you around.

The funny thing is that some guys can’t handle that chase, and if you actually do lose interest, they will turn you into the “one that got away” in their minds.

Honestly, being a wild card is the easiest way to mindf*ck someone. Just being odd makes people wonder what you’ll do next, even if you’re relatively predictable.

If a guy lets you choose the date locale, choose something that would make him a little worried or scared. The reason this works is because studies show that fear often will provoke a response that makes someone feel like they’re falling in love. Interestingly enough, it works on men as well as it works on women.

5. Give him a little bit of worry about whether or not he can actually please you.

This one is risky, because it can backfire pretty easily. The gist of this mindf*ck method is pretty simple: make him realize other guys are trying to get with you, too. Don’t flat-out tell him, but let him actually see other guys fawning over you. Your role in this is to seem mildly disinterested, which makes him feel privileged to be with you but not 100 percent certain on you.

6. Hold back on affection if he blows you off.

Mirroring men’s behavior towards you really messes with them. They often expect women to flood their phones when they pull back on them. They may even try to act huffy when you ask them to do something. Teaching him how to treat you by mirroring him will force him to either treat you well, or not treat you at all.

Being a mindf*ck isn’t a bad thing per se. You just have to use your mindf*cking powers for good rather than evil. Make sure you know what you’re doing before you use one of these tactics — they can permanently get a guy obsessed with you.