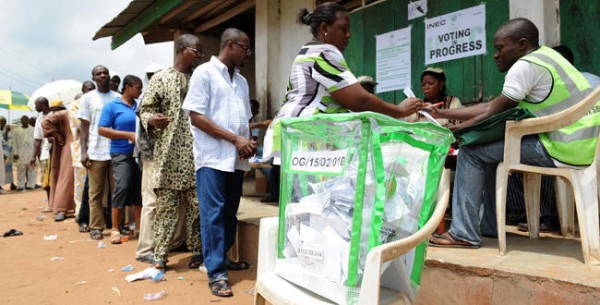 The Peoples Democratic Party, PDP, has rejected the results of Saturday’s local government elections in Ogun State and called for its cancellation.

The South-West Zonal Secretary of PDP, Bunmi Jenyo, who made the call at a press conference on Sunday in Abeokuta, the state capital, said the council elections were characterized by fraud and irregularities.

According to the results declared by the Ogun State Independent Electoral Commission (OGESIEC), the governing All Progressives Congress (APC) won the chairmanship positions in all the 20 local government areas and 37 Local Council Development Areas (LCDAs) in the state.

Chairperson of the commission, Mrs. Risikat Ogunfemi, who declared the results, said the party also won 346 councillorship seats out of the 349 wards in the state.

The Unity Party of Nigeria, however, won two councillorship seats while the PDP won one in the election, which a total of 17 political parties participated in the poll.

But Jenyo described the poll as “condemnable, irresponsible and unacceptable”, adding that the height of irregularities and violence masterminded by the APC was due to the ruling party’s imminent loss to opposition PDP in the process.

He alleged that APC resorted to rigging because of the rejection of its candidates by the people across the state.

Mr. Jenyo said the action of the ruling APC was “barbaric, primitive and ridiculous”, taken because “PDP’s popularity scared them to resorting to violence which marred the entire process completely”.

The South-West zonal secretary of PDP claimed that election materials were not supplied in some local governments, such as Ijebu water side, and that “ballots boxes, papers and other electoral logistics were not provided by OGISIEC”.

The PDP spokesperson said ballot boxes and papers were hijacked by miscreants in some local government areas, particularly in Abeokuta.

He further alleged that there were sporadic shooting in some local councils, and that some PDP members who resisted the hoodlums sustained injuries from gun shots and machete cuts in Ilara, Remo North Local Government Area.

‎Mr. Jenyo said some of his injured party members were being treated at Backcock University Teaching Hospital in Remo council area of the state.

“As a result (of the violence), many voters were scared and terrorized to leave their polling units”, he said.

“Definitely, with the aforementioned facts, it is obvious that the election exercise must be cancelled outrightly, if democratic values are anything to go by in Nigeria. And we therefore call for its cancellation”, the PDP stalwart stated.