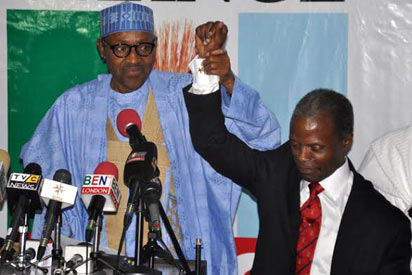 Vice President Yemi Osinbajo (SAN) yesterday quelled the rumours surrounding his emergence as vice presidential candidate of the All Progressives Congress (APC) in the 2015 presidential elections.

Recently, there was controversy over how a relatively unknown Osinbajo emerged running mate to then General Muhammadu Buhari (retd.) in the last presidential election after a Professor of International Studies, John Paden, claimed in his official biography of the president that the former Lagos State Commissioner for Justice was picked by Buhari ahead of Asiwaju Ahmed Tinubu and ex-Governor Babatunde Fashola.

In the biography titled “Muhammadu Buhari: Challenges of Leadership in Nigeria” and launched two months ago in Abuja, Prof. Paden claimed that Buhari chose Osinbajo above others, despite immense pressure from Tinubu to do otherwise.

The author’s claim generated controversy because the general belief was that Tinubu nominated his former commissioner for justice as running mate to Buhari.

Erasing doubts over his emergence as the APC presidential running mate, Mr. Osinbajo, a Professor of law, confirmed that he was nominated by Tinubu, under who he served as commissioner in Lagos State.

“I was nominated by the leader of our party, Asiwaju Bola Tinubu, under who I served as a commissioner in Lagos State”, Osinbajo said at a colloquium on the state of the nation in Lagos organised by the Coalition of Nigerian Apostolic Leaders (CNAL).

Osinbajo at the colloquium also spoke of Federal Government’s determination to intensify the battle against corruption which he called one of the key strategies for liberating the country from recession.

Government, he said, would revamp the economy through diversification, development of infrastructure and creation of a conducive atmosphere for the private sector to increase productive activities and boost employment opportunities.

According to the vice president: “The reasons for the recession are because of the drop in the production of oil and corruption. Other factors are the manifestation of the two problems”.

While pointing out that things were not going to change overnight as a result of the damage that had been done to the economy, Mr. osinbajo recalled that even the Israelites once complained to Moses to take them back to Egypt, the land of corruption, when they got to the Red sea.

Urging Nigerians to have patience with the Federal Government as it intensifies its efforts at repositioning the economy, the vice president lamented that $15 billion was lost to corruption through the defense contract under the last administration.

He said the problem in the Northeast could have been averted, if the money meant for arms procurement had not been stolen.

The vice president explained measures adopted to boost revenue generation and prevent graft. These include the banishment of the menace of ghost workers and payroll fraud, the enforcement of tax compliance, the introduction of the Treasury Single Account (TSA), the expansion of the Value Added Tax (VAT) coverage, the deregulation of the downstream sector and concerted action on the foreign exchange rate

He said the Federal Government will pursue the diversification of the economy through the development of agriculture to guarantee food sufficiency, job creation and export to attract earnings.

On the anti-corruption war, Osinbajo said: “Allegations of corruption must be submitted to the right channels. The President does not interfere in the activities of the agencies. He has given the agencies concerned the independence to act, when a formal complaint is submitted. Where there are proven cases of corruption, the appropriate agencies will always act”.

Osinbajo also said Christians should not panic over speculations about Sharia bill in the National assembly.

He said “The government should not be interested in any Sharia matter beyond what is in the constitution. If the government is interested, it is the Attorney-General that will submit the bill, following the decision of the Federal Executive Council”.