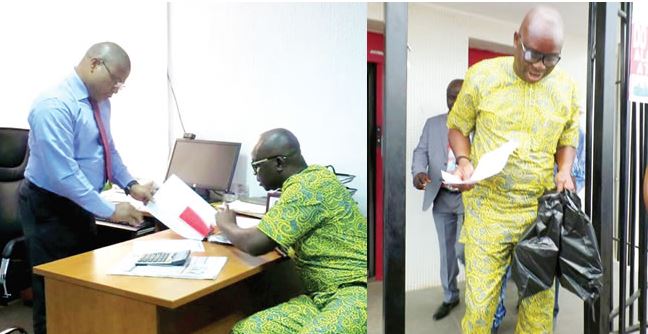 The Ekiti State Governor, Ayodele Fayose, on Thursday visited the Zenith Bank in Ado Ekiti to withdraw money from his bank accounts earlier frozen by the Economic and Financial Crimes Commission.

His action followed the judgment of a Federal High Court sitting in Ado Ekiti on Tuesday which ordered the EFCC to immediately unfreeze the accounts after condemning the action of the anti-graft agency.

The commission had frozen Fayose’s account and some of his associates’ after allegedly tracing N4.7bn from the Office of the National Security Adviser to them and those of two sons of a former Minister of State for Defence, Musiliu Obanikoro.

Delivering judgment in the suit on Tuesday, Justice Taiwo Taiwo had said the EFCC’s action breached the governor’s fundamental rights to fair hearing, as the commission did not make him a party to the proceedings for the interim freezing of the account.

The governor made a sudden appearance at the bank on Thursday to make a withdrawal from his account around 1.20pm and went straight to the office of the branch manager, Mr. Mojeed Adekunle, where he presented a cheque.

“I am ready to wait in your office till you close for the day as I want my money in cash,” he said, looking straight into the manager’s eyes.

The manager quickly made some calls and later made arrangements to pay the governor.

While this was happening in the banking hall, the bank’s security guards locked the governor’s Chief Security Officer outside.

All entreaties to them failed as the security guards said there was an instruction to prevent people from going in.

Tension, however, built when the security men started allowing customers in but still insisted that the CSO must remain outside.

The CSO after waiting for sometime lost his cool and in turn prevented other customers from going into the bank if he would not be allowed to stay with his principal.

It took the intervention of the branch manager to allow the CSO into the banking hall.

After two hours of waiting, the governor came out of the bank with the N5m cash in two polythene bags and addressed journalists already waiting outside.

He said, “I came to the bank after serving them with the court order and I made up my mind that I won’t leave the bank until my money is given to me. And the bank has done the needful by giving me part of the money confirming that they have obeyed the court order.

The governor ruled out the possibility of closing his two accounts with the bank since it had complied with the judgment.

“As a sitting governor, my immunity is absolute just like that of the President. They should tell the EFCC to shut up. There is no authority other than the authority of the constitution of this country which I enjoy.

“Rubbishing the office of the governor is as the same as rubbishing that of the President because after the President, governors are the next. It is their time now, another people’s time will come tomorrow. There is no place for dictatorship in Nigeria,” he fumed.