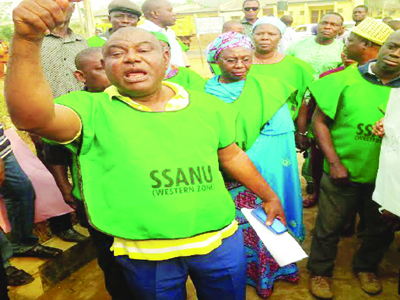 Non-academic unions in the Nigerian universities say they will on Monday embark on a five-day warning strike over the inability of the Federal Government to implement the 2009 Agreements with the unions.

The unions are the Senior Staff Association of Nigerian Universities (SSANU), Non-Academic Staff Union (NASU) and the National Association of Academic Technologists (NAAT).

The Joint Action Committee (JAC) of the unions in a statement stated that the warning strike became necessary in order for government to fully implement the 2009 FGN/Non-Teaching Staff Unions Agreements it freely entered into with the unions.

JAC said that a letter of the warning strike signed by Mr Samson Ugwoke, SSANU President, Mr Sani Suleiman, President of NAAT and Chris Ani, NASU President had been send to the Minister of Education.

JAC said that the letter was also copied to the Minister Labour and Employment, Executive Secretary, National Universities Commission and President of Nigeria Labour Congress.

The statement quoted the committee as saying that “the University system is challenged by poor governance and administrative lapses which needs to be addressed holistically.

“Poor funding of our universities, shortfall in payment of staff salaries, increasing corruption in the university system should be addressed.’’

It also listed as among the problems that required attention of the government was inadequate physical infrastructure and abandoned projects which they said had reduced the capacity and output of its members.

Other areas were lack of adequate teaching and learning facilities which had reduced the productivity of members and the non-payment of Earned Allowances being product of the 2009 Agreement, among others.

Meantime, JAC had petitioned President Muhammadu Buhari over what it described as the “continued industrial unrest at Federal University of Technology, FUTA, Akure: the need for decisive government action concerning the university’s Vice Chancellor.”

In a letter to President Buhari, JAC said that arising from issues of serious disagreement between labour unions in the institution and the Vice Chancellor, Prof. Adebiyi Gregory Daramola, there had been continuous industrial unrest.

“It is noteworthy that the university has been experiencing serious industrial disharmony since Oct. 6, 2016 as a result of workers demand for the removal of the VC on grounds of alleged corruption and maladministration.

“Sir, it is on record that the Vice Chancellor has a case to answer at the EFCC. He is however yet to be arraigned. Indeed, the allegation of corruption against the VC is substantial.

“It is the candid opinion of the Joint Action Committee (JAC) unions of NAAT, NASU and SSANU that a government which is bent on fighting corruption in all ramifications should not turn a blind eye under these circumstances.

“So, it will be in the interest of justice and industrial harmony that the VC be prosecuted by the relevant government agencies so that normalcy can be restored in the university,’’ it said.