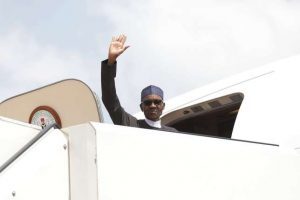 Sources in London have confirmed that President Muhammadu Buhari is alive but very ill and may not come back to Nigeria anytime soon.
A source told Guardian that President Buhari attended prayers at a mosque in London last Friday.
“The man is alive, but not okay. He is very ill. He is probably not going home soon,” the source said.
“He went for prayers on Friday. I saw about four cars leaving Abuja House. Maybe that was him.
“For Buhari to have attended the mosque indicates that he is not dead and that though he may be sick, he is getting well,” the source added.

Another source noted that: “he (President Buhari) comes out in the evenings, but is very ill.”
Asked if by “outside” he meant the front of the house, the source shook his head to the contrary, to indicate the back of the house.

Meanwhile, the Christian Association of Nigeria (CAN) has urged Christians to continue praying for President Muhammadu Buhari until he returns to the country hale and hearty.
This is contained in a statement signed by Pastor Adebayo Oladeji, Special Assistant Media and made available to journalists on Thursday in Abuja.
pulse.ng