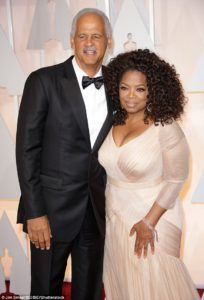 In a new interview, the 63 year old media mogul said she has no regrets over not having children with her partner of thirty years Stedman Graham, because she doesn’t have the ‘patience’.

Rather, her famous Oprah Winfrey Leadership Academy for Girls, a boarding school in South Africa which opened in 2007 and houses 172 girls, makes her feel as though she has children of her own.

“It is more rewarding than I would ever have imagined. I was doing this to help them, but it has brought a light to my life that I can’t explain…

‘When people were pressuring me to get married and have children, I knew I was not going to be a person that ever regretted not having them, because I feel like I am a mother to the world’s children.

Love knows no boundaries. It doesn’t matter if a child came from your womb or if you found that person at age two, 10 or 20. If the love is real, the caring is pure and it comes from a good space, it works.”

Oprah lost a premature baby when she was just aged 14, who she named Canaan.