Luis Suarez is arguably the most notorious soccer player playing professionally today. He is both one of the most talented players in the world and one of the most controversial at the same time. Many fans will know him as the Barcelona forward who helps teammates like Lionel Messi and Neymar win game after game. Many more will know him from some infamous biting incidents on the pitch. But whatever your relationship might be to the Uruguayan national, these are six facts you most likely did not know about the star.

Number Six: Luis Suarez Used to Sweep the Streets of Montevideo before Becoming a Professional Player

Though he has been a millionaire for most of his adult life, his wallet wasn’t always so padded. Growing up, he would sweep the streets of the Uruguayan capital. But he would still practice his soccer skills while he was on the job.

Number Five: He Is Married to His Childhood Sweetheart

Her name is Sofia Balbi and they have been married since 2009. He actually took her out on their first date after saving up a little extra money from his street sweeping gig.

Luis is one of seven brothers, and both he and Paolo are currently professional players. Paolo plays for a club called Sonsonate in El Salvador.

Number Three: He Is the Second of Barcelona’s Luis Suarez’s

The Spanish national Luis Suarez Miramontes also played for the world famous club back in the 1950s and 1960s.  The first Suarez scored over sixty goals for the team – but the current Luis will surely outshine him by the end of his career.

Number Two: He Has Two Nicknames

They are El Pistolero – which means “the gunfighter” an El Conejo – “the rabbit.” Judging by his reputation, the first suits him better.

Number One: He’s Been a Biter for Years

Many soccer fans – even the most casual of fans – will know about Suarez’s history of biting other players in matches.  But most don’t know that he has been an unwieldy player from a young age since he got a red card after headbutting a referee at age 16. 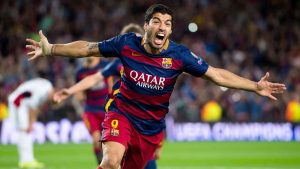