The  Abia State Police Command has arrested a fraudster 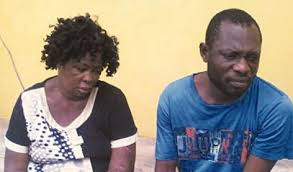 that he was once a victim of fraud, adding that the people that defrauded him were also the ones that introduced him to the crime.

Nwokacha Lucky and his accomplice Rekiyat Sunday were members of a 419 syndicate, who specialised in picking unsuspecting passengers to unknown destinations to defraud and rob them of their belongings.

Responding to questions from newsmen, Lucky said, “I was duped by some fraudsters while on a journey. Later, I saw one of them and identified him. When I wanted to report him to the police, he asked me to calm down and told me to join them in the business in order to recover my money.

That was why I joined them. But I had not been lucky with this business before my arrest.” On her side, Sunday said her duty was to sit in the car, adding that after an unsuspecting passenger entered the car, she would introduce a discussion about certain amount of money she allegedly took away from her master, which she would want all the passengers to share with her.

The widow, who claims the death of her husband led her into the nefarious act, said, “If the passenger we want to dupe develops interest in sharing the money with us, one of us will suggest that we should visit a pastor who will pray for the money before we share it.

When we get to the pastor’s house, he will then tell us to bring money to pay him before he will pray for the money. At that point, we will tell our victim to bring his/her money, phones and other belongings for us to sell and raise the money to pay for the prayer.”