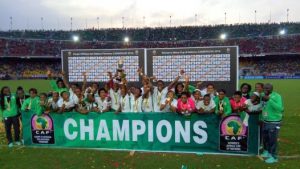 The Super Falcons of Nigeria have moved up one place on the monthly FIFA world rankings to 34, while retaining their place as the top-ranked African side.

The rankings released by FIFA on Friday showed Nigeria as having amassed 1613 points to maintain their status as African champions, with Ghana its nearest African side on the rankings at 45th.

Cameroon, which lost to Nigeria in the final of the 2016 African Women Championship it hosted, is 47th on the rankings and Equatorial Guinea are 50th.

In the overall rankings, England moved back up to fourth, overtaking Canada to equal its best ever position.

Germany replaced world champions U.S. as the number one team.

England came third at the SheBelieves Cup competition earlier in March after a 1-0 win over the U.S. and defeat by European and Olympic champions Germany.

Northern Ireland rose four places to 55th, while Wales moved up one to 33rd and Scotland stayed at 21st position.

It is the first time since March 2015 the U.S. has been replaced at the top of the table.