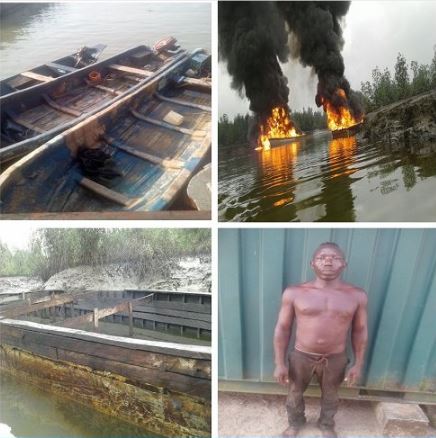 The Nigerian Navy has intensified effort in her fight against crude oil theft and illegal bunkering once again.
The navy is winning the war gradually on daily basis, Forward Operating Base (FOB) BONNY anti-crude oil theft patrol team acting on information discovered 2 Cotonou boats laden with product suspected to be crude oil along Peter Side Creek, the boats were destroyed along with the products.
In a similar operation, another Navy Base , FOB FORMOSO’s patrol team has arrested 3 suspected vandals/looters onboard a vessel MT FRANKENSEN, other item recovered were, one speed boat with 1 x 75 HP engine, one pumping machine, one Hacksaw and spanners.
Another 2 speedboat mounted with 75HP engine each were also recovered from MT ASHKAY, as the suspected vandals jumped into water and swam to a nearby creek on sighting the naval patrol team.
The 3 suspect were arrested and presently in custody for further investigation.