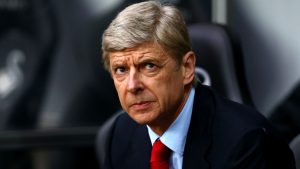 Manager of Arsenal Football Club, Arsene Wenger has insisted  that he will not retire at the end of the season, even if he won’t be staying at the Emirates.

Wenger speaking at the pre-match conference ahead of the game against Manchester City.

He said: “I will not retire, retiring is for young people. For old people retirement is dying. I still watch every football game. I find it interesting.

“I carry a bit more pressure on my shoulders than 20 years ago [when he first arrived at Arsenal] but the hunger is exactly the same.

“When you see what the club was and what it is today – when I arrived we were seven people [members of staff] – we are 700 today.

“I hate defeat. But I can understand the fans that are unhappy with every defeat.”

The 67-year-old Wenger, who has managed the London club for more than 20 years, is out of contract at the end of this campaign and has been coming under the pressure from fans and pundits to vacate his position.