A member of the House of Representatives, Mr Kehinde Odeneye, says the 2017 N7.28tn budget will be monitored to ensure the release of funds and its implementation to the letter once it is assented to by the President.

Odeneye, who represents Ijebu Central Federal Constituency in Ogun on the platform of APC, also ruled out “padding’’ in the budget.

He told newsmen in Ijebu-Ode on Monday, “We have done our own bit and part of the job as lawmakers saddled with the responsibility of approving the nation’s budget and also ensuring national spread.

“After passing the budget and it is assented to by the President, we will monitor its implementation by ensuring that money is released and projects executed,’’ he said.

The National Assembly had on May 11 passed the 2017 Appropriations Bill, raising the budget from N7.28 tn earlier proposed by President Muhammadu Buhari in December last year, to N7.44tn.

The Appropriations Committees of the Senate and the House of Representatives separately presented their harmonised reports of the budget for consideration and subsequent passage on Thursday.

Odeneye, however, called for a synergy between the executive and legislative arms for a successful budget implementation and for the oversight functions of National Assembly members.

The lawmaker said he was sponsoring a bill to amend the Education Tax Act of 2004 for an upward review of the penalties for non-compliance with the Act.

“The bill has been submitted but not yet listed,’’ said Odeneye, a chartered accountant and House Committee member on Public Accounts.

On pressure from the electorate, he appealed to the people not to demand or collect money from politicians to vote them into office.

Describing demands for money from elected public officers as corruption, Odeneye said: “I appeal to the electorate not to demand money from politicians for voting them into office.

“If you do not collect money from them and they do not perform, you can curse them. But if you have collected money, the curse will have no effect,’’ he said on the sidelines of his skills acquisition and empowerment programme for another batch of 447 youths and women.

Gov. Ibikunle Amosun and Odeneye gave out the items at the event held at Dipo Dina Stadium, Ijebu-Ode.

In his speech, Amosun said the empowerment programme complemented his administration’s effort at creating more jobs and alleviating poverty.

“It is giving back to the society; creating jobs will ensure wealth creation.

“I commend the effective representation of Odeneye of the Ijebu people in the National Assembly,’’ said Amosun, who was represented by the Speaker, State House of Assembly, Mr Suraj Adekumbi. 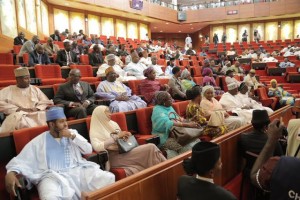