Musa Sunday, the detective attached to the Special Anti- Robbery Squad (SARS), Ikeja, Lagos State Police Command, who has been missing since last November has been found buried in a shallow grave in Ibeju Lekki.

It’s been discovered that Inspector Sunday, was abducted, tortured and later buried alive while on illegal duty, guarding a land under dispute at Ibeju Lekki.

Sunday and four of his men were alleged to have been drafted to guard the land by their Admin Officer (AO), at Ibeju Lekki without the knowledge of the Officer in Charge of SARS (OC) and the Lagos State Commissioner of Police, Mr. Fatai Owoseni. The father-of-four, with children aged 4,6,8 and 12, was reportedly trying to save a civilian guard from hoodlums when he was attacked and kidnapped while his men escaped.

His colleagues who escaped reported that they immediately went to Mobile Police Force (Mopol) 49, Epe for help in rescuing Sunday but nothing was done. They then went to Akodo Police Station but the DPO said she couldn’t send anyone to the area because it was a volatile axis. From there they reported to SARS, Ikeja, and for five days, no action was taken to rescue Sunday. Later, policemen started looking for Sunday. They went to Bonny Camp, Victoria Island in their search for him but the soldiers said Sunday wasn’t with them. When the OC SARS went to meet Owoseni, to inform him of the missing inspector, Owoseni demanded to know the person that deployed Sunday and his men on the illegal duty.

Sunday’s phone was eventually tracked through the efforts of the Police Special Intelligence Response Team (IRT) operatives and that led them to Sunday’s alleged killers. It was then discovered that Sunday had been tortured, starved for five days and when his men did not come after those days, they took him to the traditional ruler who instructed them to bury Sunday alive. At least five people, including the traditional ruler known as Baale have been arrested in connection with the murder. Investigation revealed that the attack and burial of Sunday was led by one Mr Balogun who is now on the run.It was Balogun who tied his hand before burying him.  Balogun’s second in command, Arokin, has been arrested and it was him who confessed that Sunday was buried alive.

The suspects led police to where Sunday’s rifle was buried and also to the traditional ruler who denied knowledge of Sunday’s murder. Baale was invited to the police command but rather than honour the invitation, he ran to Police Force Headquarters, Abuja but was told at Abuja to go back to Lagos and respond first to police invitation. Pathologists from the Lagos State University Teaching Hospital (LASUTH), who exhumed Sunday’s corpse said that it looked as if he was buried with his hands tied behind. 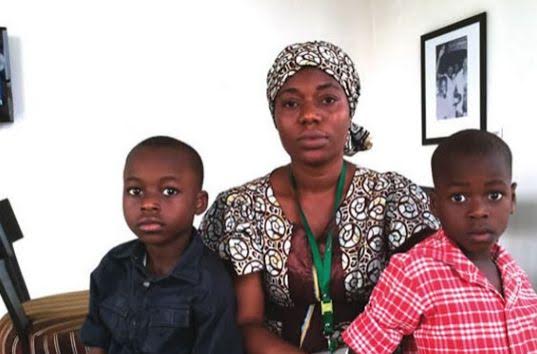 Gistmania reports that Sunday’s wife Halimat, 27, and her children are now suffering and she can no longer afford to pay their school fees. The widow, who is a housewife, lamented the lack of support from her husband’s colleague and said that her children still look forward to seeing their father. She said the fateful day of the incident, she spoke with her late husband around 4 pm and he promised to come home the following day. When at night, his kids asked to speak with him, his number was no longer available and it’s been that way till date.

“They were deployed there to maintain peace. We learnt that hoodlums were attacking a man, so my husband and his men moved to rescue the man. He told the other two policemen to go and put the man in the car so he could be safe.  The hoodlums pounced on my husband and took him away. Sensing danger as the hoodlums kept increasing in number, his men ran away. Since then, we have not heard from him.
“Three months after, police kept telling us that they were on the matter. We learnt they have arrested the Prince that hired the hoodlums, but nothing has happened since then. His children keep asking after him. His aged mother, who has high blood pressure, has not stopped asking for his whereabouts. We don’t know what else to tell her.”
She added:
“Nobody from the police cared to check on us, and now we don’t have money because we don’t have access to his ATM pin. I want my husband to come back. The children are suffering, and I can’t carry the load alone.”