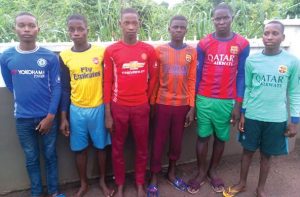 It was joy and celebration that knew no bound for parents of students that were kidnapped at the Lagos State Model College, Igbonla, Epe, on May 25, 2017, they students finally reunited with their children following their release after 64 days in captivity.

But a security source told Saturday PUNCHthat the kidnappers collected N5m on Tuesday, adding that the fresh payment led to the release of the children.

According to the source, the fresh payment brought the total ransom paid to the kidnappers to N37m.

Twenty suspected kidnappers of the pupils were killed in gun duels with security operatives in the events leading to the release of the pupils on Friday.

It was learnt that one civilian volunteer (local vigilante), who fought on the side of the security agents, was also killed, while eight policemen and four other volunteers sustained injuries in the shoot-outs.

The police said one of the members of the kidnap gang, who collected ransom on behalf of the gang, was also arrested.

The Lagos State Deputy Governor, Dr. Idiat Adebule, who received the children in her office in Alausa, Ikeja on behalf of Governor Akinwunmi Ambode, said the state government would use the holiday period to intensify security in public schools before the next term begins.

The pupils were expected to have arrived earlier but their arrival was delayed by heavy traffic on the Lagos-Ibadan Expressway.

The children were said to have been dropped at Aboto Creek in the Ilaje Local Government Area of Ondo State by some members of the gang at about 12 pm and moved to the office of the state’s deputy governor.

Adebule received the children in Lagos along with the Ondo State Governor, Mr. Rotimi Akeredolu, and his deputy, Mr. Agboola Ajayi.

She said, “I will like to commend the police and other security agencies for ensuring that the children are back. We plan to have comprehensive medical check-up on the children and they will be debriefed in collaboration with other stakeholders.

“We are going back to the drawing board to ensure that all that needs to be done in terms of security before the resumption of schools is done.”

Akeredolu said combined efforts of the South-West governors and security agencies led to the release of the pupils, adding that the role played by the Acting President, Prof. Yemi Osinbanjo, was incisive.

The Commissioner, Lagos State Police Command, Fatai Owoseni, said 20 members of the gang involved in the abduction of the pupils were killed in gun duels with security operatives.

He said two of them were ringleaders identified as Bright Adeniyi and Oniwe Iyelabo, aka America.

He said, “The response to the kidnap was swift as much as possible, which led to curtailing the gang within a specific location. Adeniyi led the abduction of the children. He met his Waterloo along with 16 others shortly after the abduction during a gun duel with security agents.

“America and two others were killed on July 18 when they attempted to invade a marine police post. The suspect that swindled the parents has been arrested.”

Owoseni was however silent on the ransom paid to the kidnappers, saying dwelling on it would glamorise kidnapping. Journalists were also prevented from talking to the pupils.

Some parents of the children, who spoke with our correspondent in Lagos, who could not hide their joy, said they were excited by the news of their children’s release after over two months in captivity.

Philips’ father, Dapo Adesegha, said, “It was unbelievable. I am very excited. Our sorrow is over. I have been receiving so many calls and congratulatory messages from people. We appreciate everybody that stood by us.”

Another parent, who spoke on condition of anonymity, said after hearing the news, he celebrated with two bottles of beer.

“I am someone who likes fun, but I had to refrain from having fun since the children were abducted. But after I heard the news, I went to a hotel near my house and had a good delicacy with two bottles of beer. I am extremely happy,” he said.

The source said, “Some parents took the N5m to Odi-Omi, Ogun State. When it was 8 pm, they came out from a bus and collected it. The parents were strictly warned to keep it a secret from the police.

“They asked them to tell the police authorities to keep off waterways or else they would not release the children. It was the money that led to the release. Together with the previous payments, they collected N37m.”