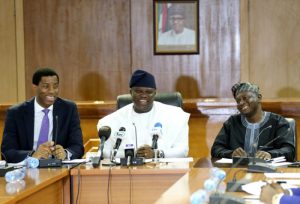 Ambode, who led some members of the State Executive Council, lawmakers and other critical stakeholders to a meeting at the NERC’s headquarters in Abuja, said the embedded power project was designed as his administration’s flagship programme for direct intervention in the power value chain towards achieving a 24-hour power for Lagos.

He said the proposed power programme would generate up to 3,000MW of power through accelerated deployment of various power plants in strategic locations across the State by private sector power providers within three to six years.

He noted that Nigerians’ aspiration to create a secured and prosperous nation that is globally competitive will be difficult to achieve without stable power supply.

Ambode posited that while efforts are ongoing to resolve the power crisis, it had become increasingly clear that the problems in the energy sector could no longer be left to the Federal Government alone to solve.

“Embedded power was designed as our flagship programme for direct intervention in the power value chain towards achieving a 24-hour power for Lagos. Lagos State has always demonstrated its capacity and willingness to play a leading role in resolving the power sector challenges in the state, subject to the limit of the federal authority allowed regulations.

“Having succeeded in powering government facilities, the next level of intervention for our government is to collaborate with other stakeholders in the power sector to design and implement a roadmap for uninterrupted power supply to homes and businesses in Lagos State.

“The draft of the Lagos State Embedded Power Bill was finalised in May 2017 and submitted to the National Electricity Regulatory Commission for clearance before same can be forwarded to the State House of Assembly.

“The stakeholders meeting holding today is a continuation of the ongoing engagement between NERC and the Lagos State Government on the Lagos State Embedded Power Programme.

“We are convinced that the offer by our government to deploy the state’s balance sheet in support of power generation, transmission, distribution, gas supply, metering, collection and enforcement in Lagos State will significantly relieve the national grid and free more energy for distribution to other parts of Nigeria.

“The proposed power programme will generate up to 3,000MW of power through accelerated deployment of various power plants in strategic locations across the state by private sector power providers within three to six years.”

He said the State Government would issue guarantees in support of the Power Purchase Agreements that will be signed between the distribution companies and the private sector embedded power providers to enhance bankability of the projects.

He added that the power generated under the programme will be distributed through the networks of Eko and Ikeja Distribution Companies while the state would support the distribution companies in upgrading their distribution infrastructure for embedded power areas in line with NERC guidelines.

“The State Government will support the distribution companies in installation of smart prepaid meters in the areas where embedded power is deployed. We will institute a cost-reflective tariff regime that is fair to all stakeholders, sustainable and capable of attracting private capital to the sector on a continuous basis.

“Other areas of collaboration include support for revenue collection, legislation and establishment of an agency for enforcement of power theft laws in Lagos.

“Our prayer today is to seek the commission’s no objection letter for the Lagos State Embedded Power Programme, based on cost reflective tariff regime that is fair to all parties and capable of unlocking private sector investments into the power sector on a sustainable basis,” the Governor said.

Responding, the NERC’s Commissioner in charge of Legal License and Compliance, Dafe Akpeneye, who stood in for the Commission’s Vice Chairman, promised that the NERC would work with the Lagos State Government to ensure the success of the programme.

“Within the ambit of the law and existing regulations, you have our unflinching support in this project.

“So in response to what you said in your prayers to us, Your Excellency, I reaffirm the support of NERC towards this project. Our commitment is to create a viable electricity industry that works for Nigeria and Nigerians.

“As the laws and regulations permit us, we will work with you on this project to ensure that it does see the light of the day,” Akpaneye promised.

Akpeneye however called the Governor’s attention to some safety issues that concern the state.

He spoke about the right of way, standards and designs, electricity theft as well as customers’ enumeration.

He noted that a situation where the Commission’s record indicates that there are only 1.2million registered electricity customers in Lagos State is not tidy enough when almost all the houses in the state are connected to national grid.

Representatives of both Eko and Ikeja Distribution Companies at the meeting declared their support for the project, saying that it would be detrimental to the progress of Nigeria if they opposed it.