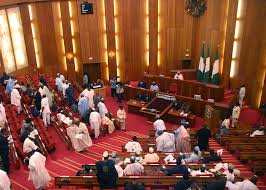 The presidency has commended the Nigerian Senate for declaring its position in support of Muhammadu Buhari’s stay in London in spite of protests by some Nigerians. President Buhari has been in London on sick leave for over three months resulting in protests by some groups in Nigeria. The Senate however says he complied with the constitution by handing over to Prof Yemi Osinbajo, his deputy.
Daily Trust reports that President Buhari’s senior special assistant on National Assembly matters, Senator Ita Enang, gave the commendation and described the Senate as patriotic. Speaking at an interacting session in Abuja, Enang reportedly said: “The stance of the senate is very patriotic; very commendable and very constitutional.
“The Senate has always stood right and upright on matters of national interest and whenever there is objection or anything that the Senate has objection to we look at it maturely and we look at it amicably. “In this particular situation as in most other situations, I commend the Senate.
“We thank the Senate for the stabilizing statement and for the position they have taken because it is the position of the law of the constitution.
“The president is entitled to, under the constitution, transmits a formal letter to the Senate and House of Representatives informing them of his vacation and until he returns and transmits another letter the acting president is still the acting president and there is no vacuum in the country.
“So, all actions of the government like that of the executive, legislature and the judiciary are going on and nothing is affected adversely by the vacation of Mr President since there is no vacuum in the country,” Enang said.