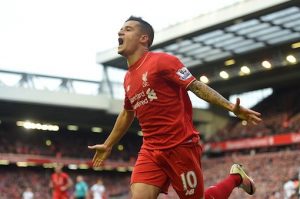 Liverpool manager, Jurgen Kloop has confirmed that Philippe Coutinho is not for sale, despite interest from the Catalan giants, Barcelona.

Klopp said the Reds are not “a selling club” following reports they rejected a £72m bid for the Brazilian in July.

It comes amid news Barcelona are considering reporting Paris St-Germain over their pursuit of forward Neymar, who has a £198m release clause.

“If you say he is not available to be sold, where is the interpretation?” Klopp reiterated on Monday.

“The word ‘not’ means there is no interpretation. There is nothing new.”

According to the BBC, Coutinho, 25, captained Liverpool to a 3-0 friendly victory over Hertha Berlinon Saturday and is set to feature against Bayern Munich in the Audi Cup on Tuesday.

He scored 14 goals last season, having spent six weeks out with an ankle injury, and signed a five-year deal with the Reds in January.

It was the Brazil international’s most productive season since he arrived at Anfield from Inter Milan for £8.5m in January 2013.