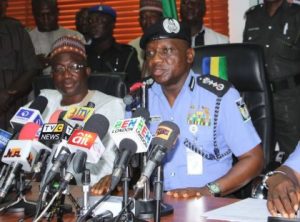 Abducted Assistant Commissioner of Police ( ACP ) who is in charge of the State Criminal Investigation and Intelligence Department, Zamfara State Police Command, Emmanuel Agene, have been released alongside his family members.

This was confirmed by the Kaduna State Police Commissioner, Mr Agyole Abeh, who stated this on Sunday while addressing journalists in the state.

Abeh said immediately the command received the news of the of the kidnap of the ACP and his family, a manhunt for the kidnappers was launched, involving the Inspector- General of Police Intelligence Response Team and the Anti-Kidnapping Squad of the state police command.

The police chief said he was elated that the ACP had regained his freedom, adding that he was stable in a police facility undergoing checkup.

He stated further that the kidnappers gave the ACP the opportunity to speak with the police, not knowing that the kidnap victim was a police officer.

The CP explained that the ACP “used a code language that aided his rescue.”

He said, “We mounted a steady air surveillance at a low level following the coded information he gave as to the location, and we successfully secured the release of the victims.”

Abeh said the police had yet to arrest any suspect in the kidnapping as of the time of briefing the press.

He, however, said the police would not leave any stone unturned towards ensuring the arrest of the kidnappers.

He added that a concerted effort was in place to track the telephone of the officer which was still active and in possession of the kidnappers.

“Immediately we received the news of the kidnap of the ACP and his family members, the manhunt for the kidnappers was activated by the Inspector General of Police intelligence team and the Anti-Kidnapping Squad of the Kaduna State Police Command.

“I am happy to inform you that the police officer and others have been rescued.

“The officer is in a stable condition at a police facility undergoing checkup,” he added.