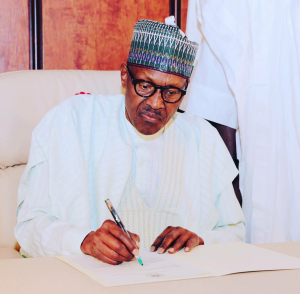 Governors from the 36 states have asked President Muhammadu Buhari to approve the balance of 50 per cent Paris/London loan refund for them ahead 2018 budget.

The chairman of the Nigeria Governors Forum, NGF, and governor of Zamfara state, Abdulaziz Yari, stated this Tuesday shortly after leading some governors to meet with the president.

Briefing journalists after the meeting, Mr. Yari said they were at the villa to remind Mr. Buhari of his directive in 2016 that 50 per cent of the money be paid to states, and the balance after reconciliation.

Mr. Yari said they told Mr. Buhari that “reconciliation is on since 2016, we are hoping that both the DMO, (Debt Management Office) Ministry of Finance, AGF and our consultants are concluding this reconciliation by November.

“So, we want to crave your indulgence so that we can factor the numbers in our 2018 budget so that we can use it for projects and other recurrent spending according to the specification given by our respective House of Assemblies”.

The Zamfara governor also said they were at the president’s office to thank him for his concern about the economy of most states and for giving them support “ranging from bail out, restructuring our debt and London- Paris club exit payment”.

He said Nigeria got out of recession largely because of the bailouts given to states by the president because most of the country’s population reside in the states.

Mr. Yari said Mr. President was “prompt” in responding to them and assured that the reconciliation will be completed when he returns from a foreign trip.

“We are going to work with the numbers when he returns from his trip, we are going to follow up this meeting with him so that we can conclude on what is going to be done next,” Mr. Yari said.