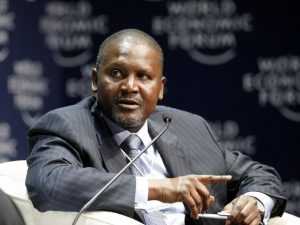 Africa’s richest person, Aliko Dangote, has attributed his resolve to achieve self-sufficiency in commodity manufacturing through the strategy of backward integration as key to the success of his business.

Speaking during a public conversation at the Financial Times’ 4th Annual Africa Summit at Claridges, London, United Kingdom, moderated by the Editor-in-Chief of Times, Lionel Barber, Dangote said the strategy had worked and was working, and urged other African nations to likewise to reduce the continent’s import bill.

The Dangote Group’s chief executive, who spoke at the forum that had in attendance Vice President Yemi Osinbajo; Congolese presidential hopeful, Moise Katumbi; and about 300 business leaders across the world, highlighted the statistics that compelled him to key into the strategy implemented by the Federal Government.

He stated that his ultimate ambition was to see an African nation that would stop importation totally at the end.

Dangote stated, “We are not going to import anything any longer. In Nigeria, we are learning how to produce the entire value chain.”