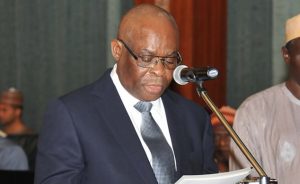 The Chief Justice of Nigeria, Justice Walter Onnoghen, on Wednesday expressed his disappointment over the sudden resignation of a former President of the Court of Appeal, Justice Ayo Salami, as the Chairman, Corruption and other Financial Crime Cases Trials Monitoring Committee set up by the National Judicial Council.

The CJN spoke at the inauguration of the committee, which is now headed by a retired Justice of the Supreme Court, Justice Suleiman Galadima.

The NJC had on Tuesday announced Justice Galadima as Justice Salami’s replacement following the ex-PCA’s resignation reported in the media last week.

At the inauguration of the Galadima-led 16-man committee on Wednesday, Justice Onnoghen noted that Justice Salami earlier gave his consent to serve on the committee.

He however expressed gratitude that Justice Galadima accepted to serve on the committee.

He said, “The committee was initially billed to be headed by His Lordship, Hon. Justice Ayo lsa Salami, OFR, former President of the Court of Appeal.

“Having earlier given his consent, we regret that His Lordship is unable to assume the leadership of the committee for personal reasons. We do hope however that His Lordship, Hon. Justice Ayo Salami, OFR, will in the near future, be available to offer the judiciary in particular and the nation in general the benefits of his wealth of experience.

“However, I am pleased to announce that Hon. Justice Suleiman Galadima, JSC (retd.), CFR, has graciously accepted to serve as the chairman of the committee.”

Members of the committee are the current President of the Nigeria Bar Association, Mr. Abubakar Mahmoud, and some of his predecessors.

The Secretary of NJC, Gambo Saleh, will serve as the secretary of the committee.

The CJN said the constitution of the committee was part of “far-reaching measures aimed at providing renewed impetus to eradicate delays in the trials of corruption and other economic crime cases in our courts” which he announced in September.

The CJN, who is also the Chairman of the NJC, said the Council at its 83rd meeting held on September 27 and 28, 2017, approved the setting up of the committee.

He said as part of such measures, he also announced that that heads of courts were directed to compile and submit a compendium of all corruption cases being handled by their various jurisdictions and also directed them to designate a court or more in their jurisdictions to handle solely such cases.