Court orders the forfeiture of money found in IKoyi house 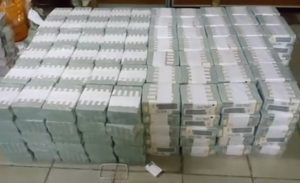 Justice Saliu Saidu ordered the forfeiture of the building to the Federal Government on Thursday following an ex parte application by the Economic and Financial Crimes Commission.

The EFCC had earlier named the wife of the sacked Director General of the Nigeria Intelligence Agency, Mrs. Folashade Oke, as the owner of the flat.

She was said to have purchased the property in the name of a company, Chobe Ventures Limited, to which she and her son, Master Ayodele Oke Junior, were directors.

Payment for the purchase of the flat was said to have been made to one Fine and Country Limited.

The EFCC stated that Mrs. Oke made the cash payment in tranches of $700,000, $650,000 and $353,700 to a Bureau de Change company, Sulah Petroleum and Gas Limited, which later converted the sums into N360,000,000 and subsequently paid it to Fine and Country Limited for the purchase of the property.