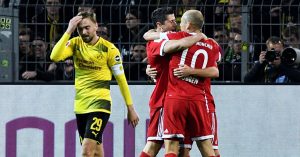 Bayern Munich stamped their authority on the Bundesliga on Saturday by opening a four-point lead as Robert Lewandowski netted an audacious goal in their commanding 3-1 win at Borussia Dortmund.

Defending champions Bayern stay on course to win the German League for a sixth straight season after dominating the high-tempo showdown at Dortmund’s Signal Iduna Park.

A superb curling strike from Dutch playmaker Arjen Robben on 17 minutes put Bayern head before a cheeky backheel from Lewandowski deflected off a defender on its way to the back of Dortmund’s net on 37 minutes.

Having missed Bayern’s 2-1 win at Celtic on Tuesday in the Champions League with a thigh injury, Lewandowski claimed his 11th league goal in as many games this season and is currently the Bundesliga’s top-scorer.

Dortmund striker Pierre-Emerick Aubameyang, the top scorer last season in Germany just ahead of Lewandowski, has now failed to score in each of his last five games, but still has 10 goals in 11 league matches.

Left-back David Alaba was credited with Bayern’s third goal which flew into Dortmund’s net just ahead of Lewandowski’s outstretched foot on 67 minutes.

The win leaves Bayern unbeaten in their seven games since Jupp Heynckes took charge at the end of September.

Third-placed Dortmund have now won just one of their last seven games in all competitions which has seen them surrender a five-point lead over Bayern in the league.

They now trail Bayern by six points and are two behind RB Leipzig, who went second earlier with a 2-1 comeback win at home to Hanover 96.

Germany striker Timo Werner, 21, who has just recovered from a neck injury, proved his form ahead of the world champions’ high-profile friendly matches against England and France in the next 10 days.