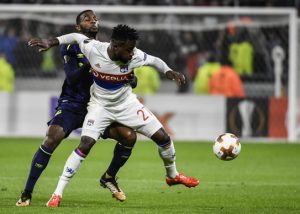 Former Manchester United winger completed the scoring himself late on after another ex-United player, Morgan Schneiderlin, was sent off for a second booking in the Group E clash.

Seven-time European champions AC Milan, in the midst of a poor run of form in Serie A, failed to relieve much pressure on under-fire manager Vincenzo Montella following a 0-0 draw at AEK Athens.

The Italians hit the post on 57 minutes through Riccardo Montolivo, while Turkey midfielder Hakan Calhanoglu had a powerful drive turned away as Milan remained two points clear of their Greek hosts in Group D.

Vitaliy Buyalskiy fired Dynamo Kiev into the knockout phase as winners of Group B after the Ukrainian side secured a 1-0 victory over Young Boys in Switzerland.