Home News Feed Four Bullet Proof Cars And 6,206 Bags Of Rice Seized By Customs
Facebook
Twitter
WhatsApp
59 assorted vehicles and other contraband products have been impounded by men of the Nigeria customs service in Lagos state. 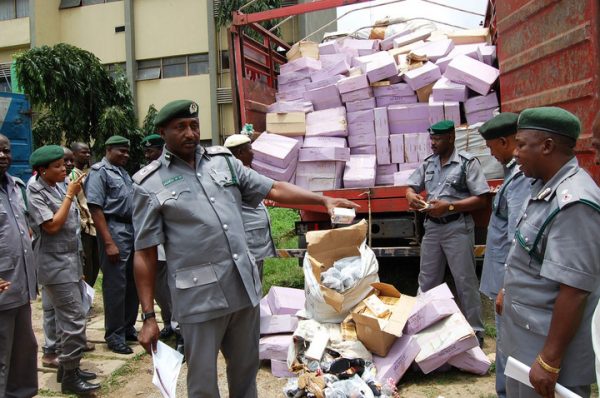 The Federal Operations Unit, Zone A of the Nigeria Customs Service with headquarters at Ikeja, Lagos has evacuated 59 assorted vehicles with the Duty Paid Value (DPV) of one billion, seventy-six million, eight hundred and ninety-five thousand, seven hundred and seventy-two naira, two Kobo (N1,076,895,727.2) from a hidden house in Ikoyi and car marts in Festac area of Lagos state.
According to the Customs Area Controller of the unit, Comptroller Mohammed Uba Garba while briefing newsmen in Lagos today said that over 40 of the vehicles were 2017 models ranging from Toyota Prado Jeeps, Lexus Jeeps, Toyota Hilux, Toyota Camry, Coaster Bus, Toyota Hiace Bus among others.
Mohammed hinted that the vehicles were currently under detention awaiting relevant Customs documents from the dealers within a grace period of one month.
According to him: “Some are even bullet proof which require End User Certificates from the Office of the Security Adviser (NSA). Investigation will reveal further on those behind the clearance of these vehicles and must face the full wrath of the law. These vehicles alone have a duty paid value of one billion, seventy-six million, eight hundred and ninety-five thousand, seven hundred and seventy-two naira, two Kobo (N1,076,895,727.2) only”.
He further disclosed that six thousand, two hundred and six (6,206) bags of foreign parboiled rice of 50kg each which was more than ten (10) trailers, sixty-seven (67) bales of second hand clothing, six hundred (600) cartons of foreign poultry products, thirteen (13) parcels of Indian hemp, four hundred and five (405) pieces of used tyres and fifty-four (54) kegs of foreign vegetable oil were also seized.
He continued: “Similarly, two containers were also seized for contravening customs law. While one of the containers carried used fridges, 270 cartons of refined sunflower oil, 55 pieces of used gas compressors, 18 packs of juice and other assorted items as against cooking gas declared in the SGD, the other container was carrying 147 bales of printed wax and 168 of lace material as against new electronics declared in the SGD.
“These containers are seized for carrying contraband and entered under false declaration in order to beat the system contrary to the Customs and Excise Law Section 147. Also, a 1×40 container suspected to be carrying prohibited goods is under prohibition.
“It is instinctive to note that a total of six (6) suspects have been arrested relating to these 120 seizures. The Indian hemp will be handed over to NDLEA for further action”.
The Controller stated that the unit through interventions recovered one hundred and forty-four million, four hundred and thirty-three thousand, five hundred and twenty-four naira (144,433,524) from duty payments and demand notices on general goods that tried to circumvent the law at seaports, airports and border stations through wrong declaration, transfer of value, underpayment of duty accrued to the federal government of Nigeria within the weeks under review.
“Between 4th-31st October, 2017, the unit has intercepted various contraband with Duty Paid Value (DPV) of One billion, three hundred and fifty-three million, six hundred and seventeen thousand, one hundred and four naira, eight Kobo (N1,353,617,104.08) only,” he added.