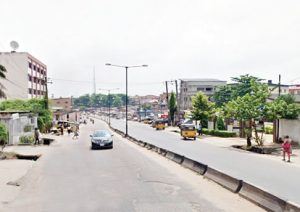 A guard in the Isheri area of Lagos State has been arrested by the police for allegedly aiding an attack on a widow, Comfort Isong, and her daughter, Emmanuela Isong.

The unnamed guard was said to have collected N3,000 from the masked attacker, who subsequently stormed the victims’ residence on Oluwakemi Street, Isheri Oke, around 2am.

He was said to have stabbed Comfort and her daughter in different parts of the body and fled the scene.

It was  learnt that some residents responded to a distress call from Emmanuela and went after the assailant, while others rushed the victims to a hospital.

It was gathered that the assailant, who was arrested and identified as John, was a resident of the area.

He reportedly declined to open up to the police on why he attacked the victims.

The 54-year-old widow told our correspondent that John did not request any valuable from them.

She said, “Around 2am on Tuesday, November 15, my daughter and I were sleeping when we heard a bang on our door. As I opened the door to check what was happening, a masked man brought out a knife and said he had come to kill us.

“Before I could utter a word, he pounced on me and stabbed me. My daughter rushed out of her room. She tried to unmask him, but he overpowered her and stabbed her at five different parts of the body. He escaped through the fence.”

Emmanuella said the suspect was tracked down at a neighbouring street, and was handed over to the police at the Isheri division.

She said, “He did not demand money or property. He only shouted that he had come to finish us. When he noticed that some neighbours were coming to our apartment, he escaped through the fence where he came from.

“When he was caught and unmasked, he turned to be John who lives in the neighbourhood. He is a drummer in a church in our community. We later learnt from the police that he paid N3,000 to a guard to gain access into the community.”

Our correspondent learnt that the guard and John were in custody of the Federal Special Anti- Robbery Squad, Lagos State Command, Ikeja.

The Lagos State Acting Police Public Relations Officer, SP Chike Oti, promised to make enquiries on the case and get back with comments.

He said, “However, if the case has been reported to the police, everybody should await the outcome of the investigation.”