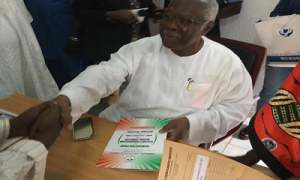 The Peoples Democratic Party led by Senator Ahmed Makarfi will have an emergency meeting in Abuja on Tuesday.

The meeting was sequel to growing apprehension caused by calls on Makarfi to quit his position before the December 9 national convention of the party.

The convention is scheduled to hold in Abuja.

The request on Makarfi to resign is being seen by members of the different caucuses in the party as an indication that the national convention may further polarise the former ruling party.

Besides, it was gathered that the party’s leadership and those considered as stakeholders, believed that Makarfi and his team must act fast to forestall derailment of the programmes lined up for the convention.

Already, two of the leading national chairmanship aspirants, Chief Olabode George and Prof. Tunde Adeniran, have questioned the neutrality of Makarfi in the activities that would lead to the convention.

But members of the caretaker committee and Makarfi were said to be making moves to gain the confidence of all the aspirants, including the two out of the eight chairmanship aspirants that have expressed reservations on the neutrality or otherwise of the party’s leadership.

It was gathered that the issues raised by both George and Adeniran were discussed at the emergency National Working Committee, which ended late Tuesday evening.

A source at the meeting, who spoke on condition of anonymity, said that the caretaker committee members were sincere in the running of the party.

He said both the petition sent to the party by Adeniran and issues raised by George in his statement on Tuesday were discussed.

He said, “We were not supposed to meet on Tuesday at all. Our meeting was scheduled for Wednesday (today), but we decided to meet in order to look at the issues being raised by some of our respected members.

“We understand their concern. I think it is still because of the love they have for the party. But I can tell you that we remain committed and neutral in the running of the party and the process that would lead to the convention.

“Because of that, the caretaker committee has mandated Makarfi to speak on the issues at a press briefing in Abuja on Wednesday where he would assure members of the party about his neutrality.’’

On Tuesday, the Bode George for PDP National Chairman Campaign Organisation called on Makarfi to resign his position with immediate effect, saying the role he was playing in the process towards the party national convention “is increasingly disturbing and rather untidy.”

In a statement by the campaign organisation, and signed by its Director General, Alhaji Ibrahim Aliu, the organisation said, “Apparently spurred by personal ambition of contesting the presidential office in 2019, Makarfi is brazenly allying with a particular aspirant in the South-South to deliberately distort the process, muddle equity and invariably destroy the democratic process for transient personal gains.”

“Everywhere you look, Makarfi is planting the agents of his favourite South-South candidate to stage-manage warped and skewed congresses in an undisguised mockery of all the normative patterns of our founding fathers whose enduring forte about equity, justice and fairness is now being flung into the gutter.

“In a way, Makarfi is evidently resolved to repeat the farcical malady that characterised the debacle in Port Harcourt last year. We have equally resolved that we will not be led along this ruinous path again. Never!”

It added, “We strongly advise Senator Makarfi to resign his position forthwith because he has been severely compromised. He can no longer play the role of a neutral arbiter who stands far above the fray. He is already tarred and soiled in the muddy waters of partisan prejudice.

“Makarfi should now do the most honourable thing by walking away and face his ambition squarely. He cannot use a privilege non-elective position to wangle undue advantages to his own side. It is patently unacceptable.

“We need to redeem our party by being faithful to the great ideals of our founding fathers. We really believe that elders of the party across the nation should summon an emergency summit to deliberate on the right way to reposition our party and rectify the wrongs on the ground.”

He advised George to concentrate on his campaign rather than raising what he described as baseless allegations.

Makarfi also dismissed George’s allegations as “ridiculous and unfortunate,” saying that the aspirant might have sensed that he would lose.