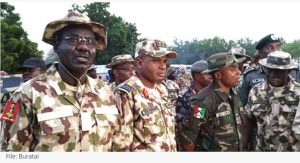 The Chief of Army Staff, Lt.-Gen. Tukur Buratai, on Monday, assured troops of the Operation Lafiya Dole that their two months outstanding operational allowances would be paid this week.

Buratai said that the Ministry of Defence had released funds for the payment of the troops’ outstanding logistics and operational allowances for the third quarter of 2017.

The army spokesman, Brig.-Gen. Sani Usman, said in a statement that Buratai commended the troops for their unflinching loyalty, perseverance, courage and dedication to duty.

The army chief said the troops had brought about the “desired success in the fight against terrorism, insurgency and other criminal activities.”

He also paid glowing tribute to troops stationed outside the shores of the nation for their patriotism, patience and understanding and assured them of prompt payment of their allowances.

He said the army high command under his leadership would remain “responsible, responsive and accountable to troops’ operational requirements.”

Buratai commended them for their bravery, discipline and loyalty, and reminded them to always have confidence and trust in the leadership of the army.

He urged them to work hard to flush out the remnants of the Boko Haram terrorists, including the cyber terrorists, wherever they were hibernating.